The Right to Counsel National Campaign 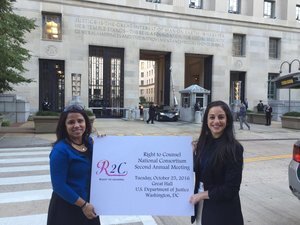 Every person in the United States accused of a crime, and whose liberty is at stake, has the constitutional right to an attorney. Today, this right to counsel, a right so fundamental it is written into the Constitution, is being denied across the country. The American public defense system has proven inadequate and the criminal justice system unfair. Innocent people are being sent to jails and prisons, young lives are being derailed, and people of color and those from low-income households are being disproportionately impacted by the failures of the system. Public defense providers are overburdened with high caseloads and few resources which limit their ability to provide effective, or sometimes even adequate, counsel.

Without action, nothing will change.

Recognizing the need for public defense reform at the state and local level and the need to include defense in criminal justice reform conversations, the Bureau of Justice Assistance (BJA) at the US Department of Justice and the Justice Programs Office at American University (JPO) formed the Right to Counsel initiative in 2015. A steering committee was formed that was comprised of representatives from various facets of the criminal justice curso diseñador gráfico profesión, including prosecutors, judges, law enforcement, state and local policymakers, public defenders, court managers, and county executives, as well as representatives from the US Department of Justice’s former Office of Access to Justice, with the shared goal of improving public defense by changing the culture and structure of public defense systems. R2C is a public awareness campaign spearheaded by a consortium of stakeholders as diverse as those on the steering committee. This consortium is committed to ensuring the fulfillment of the Sixth Amendment right to counsel and the effective delivery of public defense services, as well as laying the groundwork to continue the reform movement for years to come.